Being pregnant is the desire of most women. Being pregnant means being ready to be a mother. That became very amazing. Every prospective mother will try the best for her child, even from the child is still in the womb. Just like other mothers when I was pregnant I also prepared the best for my baby. I will share whatever I do, I feel, and I avoid during pregnancy. Let’s start from the first trimester.

I was late 2 weeks from my period. At first, I thought it might be because of the fatigue from going to Japan and Korea for a month. But this is not uncommon, my menstrual cycle is always right even in the slightest condition. I always record it in my menstrual application. Oh ya, you can also download the application called P.C. on iOS, but for Android, I don’t know, maybe the name is the same, you can check it by yourself.

After knowing I was late for 2 weeks I finally tried to test pack, and it turned out to be positive even though the lines were not too obvious. To convince myself finally I began to search the internet for reviews of doctors in Jakarta. At that time I was living in Jakarta so it was quite easy to find a review of obstetricians in Jakarta.

Long story short finally I was pregnant, then I began to find out what can and should not be done by pregnant women and what foods and drinks should be avoided.

In this first trimester, I tend to avoid foods that are processed in the way it is burned. It is not prohibited but if it is cooked until cooked. Here I avoid for fear that the processing method is not ripe unless indeed cooking it yourself. I avoid junk food too.

I experienced nausea but only the smells of rice being cooked. I don’t know if it can be called morning sickness or not haha. Maybe up to giving birth more or less just 15 times I was nauseous and vomiting.

In this trimester I still worked and also went to college. It still feels normal not to feel tired quickly, it’s just that your appetite has increased dramatically haha. But I enjoyed it without being afraid of being fat. Every time I went to work I use Gojek and in every ride, I always tell the driver to avoid potholes in the road, for fear of too shaking my stomach.

Oh yes, that should not be forgotten in the first trimester is to find a cream to prevent stretchmarks. That must and must be done, as early as possible was prevented. I’ll review the products that I used in another post.

In the trimester a miraculous thing happened haha, my stomach started to look bigger and I started to feel something squirming in it precisely on the 22nd week. Wow, it feels amazing. Masyaallah seemed to have someone who accompanied 24 hours. What makes me surprised my appetite in this trimester is not as big as in the previous trimester, instead, I tend not to have an appetite, but fortunately, my body weight and the baby did not go down.

I also rent Baby plus. It could be to stimulate the baby’s brain in the womb. I started wearing it in the 20th week. Baby plus is a device that makes sounds like heartbeats with various levels of beat speed. From what I’ve read this tool can teach children how to distinguish the sound of their mother’s heartbeat with this tool. This tool is used 2 times a day at the same time, yes of course I was often not on time, 1/2 minutes late haha.. Oh yeah, every time I used BabyPlus I feel my baby moves in the stomach, maybe that is the response.

In the second trimester, I decided to resign from work and coincidentally my college only had to write a thesis. I went back to Jogja and restarted from the beginning again, I was looking for references and reviews of obstetricians in Jogja. Ah, but it’s not as easy as looking for a review in Jakarta indeed, finally because it’s quite difficult to find the review, I checked the content at the doctor recommended by my cardiologist. Yes, I have a history of ASD, which of course has been corrected. Since I found out I was pregnant, I also routinely went to see a cardiologist in Jakarta besides checking at the obstetrician. And thankfully there was nothing to worry about from the start.

Since I returned to Jogja I have also been taking Prenatal Gentle Yoga. By following this Yoga I feel my body is fitter and not easily tired, but also never experienced leg cramps. Nah, this Yoga is also useful to train your breath to be strong when birth later. There are movements that I hate when Yoga, which is cat-cow pose haha, for some reason it’s very difficult, compared to other movements

The baby’s movements are getting stronger, the bigger my stomach is too. The body is also getting heavier and easily tired. But in this trimester I don’t want to give up and just sleep. In this trimester I try to do any of these activities.

The closer the estimated day of birth, the baby’s head down into the pelvis, and it feels incredible rheumatic pain in the pubic bone. I also diligently urinate, and the intensity to drink even more. Sleep feels like it’s starting to shortness of breath.

I also often use gym balls, especially when the ache in the pubic bone comes. Gymball can help reduce pain. I also walked every morning, because people said it could facilitate the delivery process later.

Appetite? Don’t ask haha, my weight has increased the most dramatically in the third trimester. Oh yes, I also avoid fatty foods and always drink coconut water, because the old people say it can make the baby come out clean later. Don’t know just myths or facts, but I think coconut water is more to add to the fluid in the body, and the results are even when the estimated day of birth the doctor predicted that my water will still be good and sufficient.

Being pregnant was a really amazing experience.

Em, I think that’s what I told you first, in the next post I will tell how the process of giving birth to a baby that I have experienced. 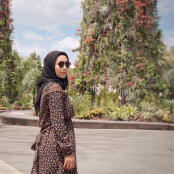